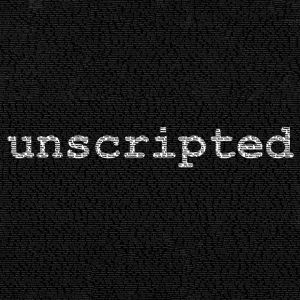 Unscripted is a weekly film review show presented by a diverse group of film enthusiasts who love watching and discussing movies.

Starting over two decades ago, Unscripted offers listeners the views from a variety of hosts that bring you the latest movie reviews, trailers and film events. Join Lewis, Rachele, Cecelia and Ada each week for their take on what's new and what's coming up in the movie world.

Lewis has worked on the various incarnations of The Film Show on Radio Fremantle since Godzilla came out.  No, really.  Since 1998.

Lewis is energized by the new team and new dynamic that has come in the form of Unscripted – The Films Show, and is looking forward to the future of the show on Radio and now as a podcast.

Rachele Jones has been a co-host of Funky Films since 2006. She has a broadcast journalism qualification and also has a background in theatre. Rachele spent a lot of her childhood devouring films and practicing her Oscar speech. When she realized she had no acting talent to speak of she swapped sides and starting reviewing films instead.

Rachele welcomed her son, Bryce, into her family in 2017.  There's a strong chance he'll come to know the cult classics as well as much as his ABCs.

Cecilia studied a year of theatre and drama, inspired by British Comedy TV show: The League of Gentlemen, before studying media and communications at Murdoch University. Cecilia loves horror films, black comedies, cult classics and independent films - in particular films with a strong narrative and full-bodied characters. She also appreciates seeing the different aspects of a film, such as sound, cinematography and composition, come together to form a well-rounded film.

Ada is an Italian journalist based in Perth, who has been writing for Italian internet movie magazine NonSoloCinema since 2004.

Since Ada has moved to Perth she has continued to write articles for NonSoloCinema and has been a regular contributor to Unscripted. She also has her own show on Thursday between 5-6pm on Radio Fremantle called Hashtag Italia.  The show is broadcast in Italian and is a mix of music, cultural news, and includes news about movies currently screening.

In addition to her work on Radio Fremantle, Ada is also doing movie reviews for SBS Italian on Friday and Saturday morning 7-9am. What make Ada unique is that in addition to speaking Italian and English she is also fluent in German giving Funky Films a presenter with a foundation in the European culture and the movie scene.

Missed an episode? Listen to Unscripted when it suits you...